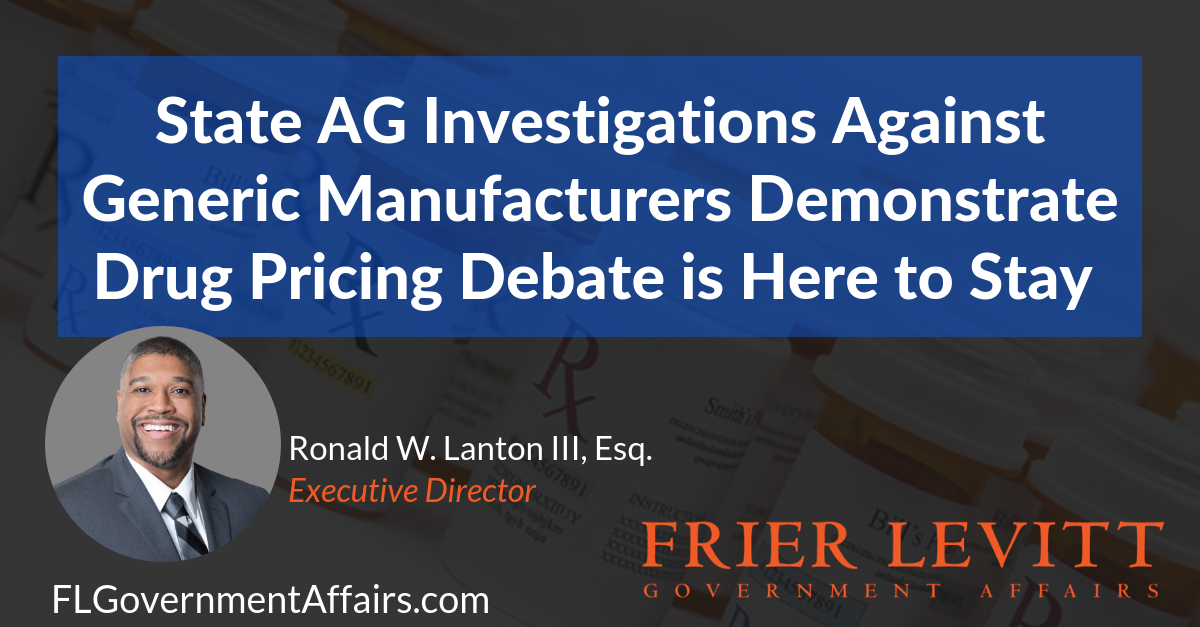 A coalition of over 40 state attorneys general and Puerto Rico have filed a federal lawsuit in Connecticut against several of the largest generic drug manufacturers as the coalition alleges the defendants conspired to manipulate prices for more than 100 prescription drugs that target chronic disease states such as HIV, diabetes, oncology and arthritis.

According to the lawsuit, the AGs reference how the generic pharmaceutical industry has a “fair share” agreement where they have “operated pursuant to an understanding among generic manufacturers not to compete with each other and to instead settle” for a fair share. “Rather than enter a particular generic drug market by competing on price in order to gain market share, competitors in the generic drug industry would systematically and routinely communicate with one another directly, divvy up customers to create an artificial equilibrium in the market, and then maintain anticompetitively high prices.” In alleging industry discussion, negotiation and collusion among the industry over the years, the suit goes into describing Teva and other co-conspirators involvement.

Additionally, the AGs allege in the suit that, “At the zenith of this collusive activity involving Teva, during a 19-month period beginning in July 2013 and continuing through January 2015, Teva significantly raised prices on approximately 112 different generic drugs. Of those 112 different drugs, Teva colluded with its “High Quality” competitors on at least 86 of them (the others were largely in markets where Teva was exclusive). The size of the price increases varied, but a number of them were well over 1,000%.”

What is interesting about this case is that this is the second one in three years that has been filed in this investigation. The first lawsuit was filed in 2016 in the U.S. District Court for the Eastern District of Pennsylvania. According to the suit, “the defendant and co-conspirators knowingly entered into and engaged in a combination and conspiracy with other persons and entities engaged in the production and sale of generic pharmaceutical products, including doxycycline hyclate, the primary purpose of which was to allocate customers, rig bids, and fix and maintain prices of doxycycline hyclate sold in the United States. The combination and conspiracy engaged in by the defendant and co-conspirators was in unreasonable restraint of interstate and foreign trade and commerce in violation of Section 1 of the Sherman Act (15 U.S.C. § 1).” That case is still ongoing as two former manufacturer executives have entered into their respective settlement agreements and are cooperating with the investigating AGs.

In addition to the aforementioned lawsuit, Congress has been active on generic drug pricing. While the Senate Finance Committee has been holding a series of hearings with Pharmacy Benefit Managers (PBMs) and manufacturers, this March the House Energy and Commerce Committee held a hearing titled, “Lowering the Cost of Prescription Drugs: Reducing Barrier to Market Competition,” where several bills were heard whose objectives where to essentially create a more consumer friendly generic marketplace.

The issue of drug price is not going away anytime soon. Frier Levitt Government Affairs (FLGA) is uniquely positioned in being a hybrid company that gives you a complete perspective. FLGA educates manufacturers and other life sciences stakeholders on legal developments, tracks and consults on state and federal policymaking, and keeps them informed on marketplace changes. If you are a manufacturer or life sciences stakeholder looking to learn more about your competitors, how your market is going to look over the next few years, or whether you can take advantage of either a law or a rule where your product is concerned, contact FLGA to learn about the options available.