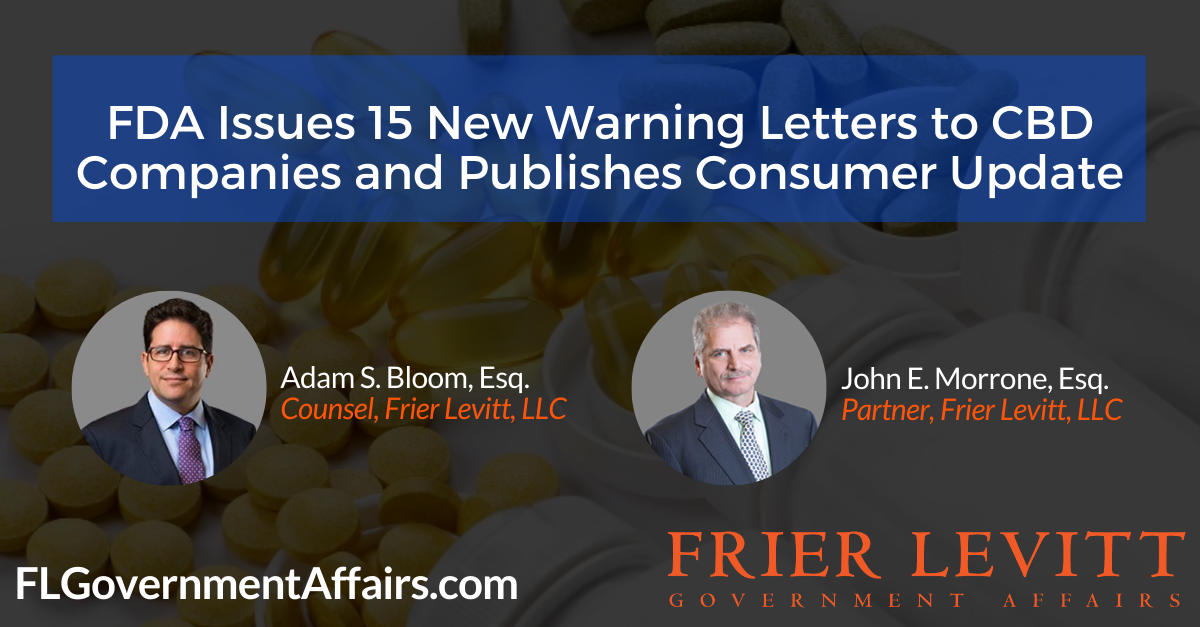 On November 25, 2019, the Food and Drug Administration (FDA) issued warning letters to 15 companies selling cannabidiol (CBD) and published a revised Consumer Update broadly detailing its safety concerns regarding CBD products. In addition, the FDA said it intends to provide an update “in the coming weeks” on its progress towards developing a regulatory approach to CBD products.

Each of the companies that received warning letters sold their products online in “interstate commerce.”  The products sold include a wide range of CBD products including oils, creams, tinctures, capsules, dietary supplements, human foods (such as gummies and chocolates) and animal foods. As has been the case in each of their previous CBD-related warning letters, the FDA focused its attention on companies that market CBD products with claims that the products cure, mitigate, treat or prevent diseases such as cancer, diabetes, opioid addiction, schizophrenia, multiple sclerosis, autism, Crohn’s disease, depression, and arthritis.

Although each of the targeted companies made illegal disease claims, the FDA made it a point to emphasize that the CBD foods (including animal foods) and dietary supplement products were in further violation of the Food, Drug and Cosmetic Act (FDCA). The FDA stated it is illegal to introduce into interstate commerce human or animal food containing CBD because CBD is an unapproved food additive – it is not Generally Recognized as Safe (GRAS) among qualified experts, and no food additive regulation authorizes its use in foods. The FDA also noted that CBD cannot be marketed as a dietary supplement because it does not meet the definition of a dietary supplement under the FDCA.

Additionally, the FDA emphasized its concern with the marketing of CBD products to children. For example, they called out a CBD product named “Asteroid Gummies” which was advertised with the claim that consumers can give the product “as a treat to your kid[.]”

Significantly, in the revised Consumer Update, the FDA conveyed its belief that there are many unanswered questions and data gaps about CBD safety and that the limited data it has seen regarding CBD point to “real risks.” The FDA’s safety concerns regarding CBD include potential liver injury, the effect of interactions with other drugs, drowsiness, diarrhea, changes in mood, effects on male reproductive health, impact on vulnerable populations such as children and pregnant or breast-feeding women, and the cumulative effects of CBD use.

In an FDA press release issued in conjunction with the warning letters and the revised Consumer Update, the FDA Principal Deputy Commissioner Amy Abernathy, M.D., Ph.D., emphasized that they are monitoring the CBD marketplace and will take action against companies that “violate the law in ways that raise a variety of health concerns.” She added that FDA believes there are “knowledge gaps” about the science, safety, and quality of many CBD products and that the FDA is concerned that people wrongly believe many CBD products have been evaluated by the FDA and determined to be safe or that trying CBD “can’t hurt.”

By issuing 15 new warning letters and articulating its concerns regarding CBD safety, FDA has reiterated its commitment to overseeing the CBD industry and demonstrated the risks of marketing CBD products without a thorough understanding of the unsettled and complex CBD regulatory environment. If you need assistance navigating the regulatory environment for CBD or other cannabis-derived products, contact Frier Levitt today to speak with an attorney.