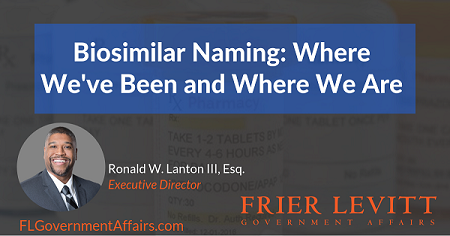 This article originally appeared in The Center for Biosimilars.

March has been a rollercoaster month for the healthcare industry. From the sudden resignation of FDA Commissioner Scott Gottlieb, MD, to the announcement of the FDA’s current thinking on nonproprietary names of biological products, I have been hearing many questions from stakeholders on what, exactly, is happening with biosimilars. Let’s take a quick look at the FDA’s latest guidance on naming and at where the FDA is headed with new leadership.

• The FDA no longer intends to modify the proper names of biological products that have already been licensed or approved without an FDA-designated suffix in their proper names.

• The FDA does not intend to apply the naming convention to the proper names of transition biological products.

• Going forward, for interchangeable biosimilars, the FDA intends to designate a proper name that is a combination of the core name and a distinguishing suffix.

Since the Affordable Care Act created the biosimilar pathway, the FDA has been trying to create the most appropriate policies for naming biological products, as well as trying to ensure drug safety or pharmacovigilance. In 2015, the FDA released 3 guidance documents, including a question-and-answer document, on the FDA’s viewpoint on the Biologics Price Competition and Innovation Act and on quality and scientific considerations for demonstrating biosimilarity. In 2017, the FDA deviated from the European Medicines Agency and the World Health Organization and finalized guidance saying that both originator biologics’ and biosimilars’ names would include 4-letter, FDA-designated meaningless suffixes.

Regarding the FDA’s 2017 suffix policy, Commissioner Gottlieb stated that “By applying this policy to originator and biosimilar products alike, the FDA sought to advance the goal of patient safety—which the suffixes promote—without creating a misimpression that products with such suffixes are somehow inferior to those without. In addition, the FDA announced in that guidance that the agency was considering retrospectively changing the names of biological products already on the market to begin adding distinguishable suffixes. Many believed that the FDA would continue to evolve on this issue, and this month’s release proves them right.

So what happens next? First, the comment period ends on May 7, 2019, so the industry has until then to submit viewpoints on this particular policy. I do not think that Commissioner Gottlieb’s resignation will create setbacks to the FDA’s ambitious views of encouraging greater generic and biosimilar utilization. It is expected that acting FDA Commissioner Norman “Ned” Sharpless, MD, will fill the void starting in April until a permanent replacement is found. Sharpless does have significant industry experience, and, in my opinion, it seems as though HHS Secretary Alex Azar has confirmed in a recent statement the FDA’s path of aggressively introducing competition into the market to lower drug prices will remain for some time. The only question is whether this new naming guidance document by the FDA will achieve clarity and safety for industry stakeholders, including patients.

The Food and Drug Administration (FDA) is out with a new proposed rule targeting pharmaceutical manufacturer and specialty pharmacy stakeholder interests. With the new proposed rule, the FDA is looking to amend its regulation that defines “biological product” to incorporate changes made by the Biologics Price Competition and Innovation Act of 2009 (BPCI Act), and provide an interpretation of the statutory terms “protein” and “chemically synthesized polypeptide.” Under this interpretation, the term “protein” would mean any alpha amino acid polymer with a specific, defined sequence that is greater than 40 amino acids in size. A “chemically synthesized polypeptide” would mean any alpha amino acid polymer that is made entirely by chemical synthesis and is greater than 40 amino acids but less than 100 amino acids in size.

The comment period for the new proposed rule on biologics is now open. The deadline to comment is February 25, 2019.

Biologics is a cutting-edge sector within the healthcare industry. Since biologics are not traditional drugs, they will need their own classification as they become more utilized. Reimbursement and regulatory oversight involving safety of biologics will depend on how the term “biological product” is defined in this proposed rule. Pharmaceutical manufacturers and specialty pharmacy stakeholders can participate in this decision by submitting comments. Contact Frier Levitt Government Affairs today to have your voice heard on this very important topic.