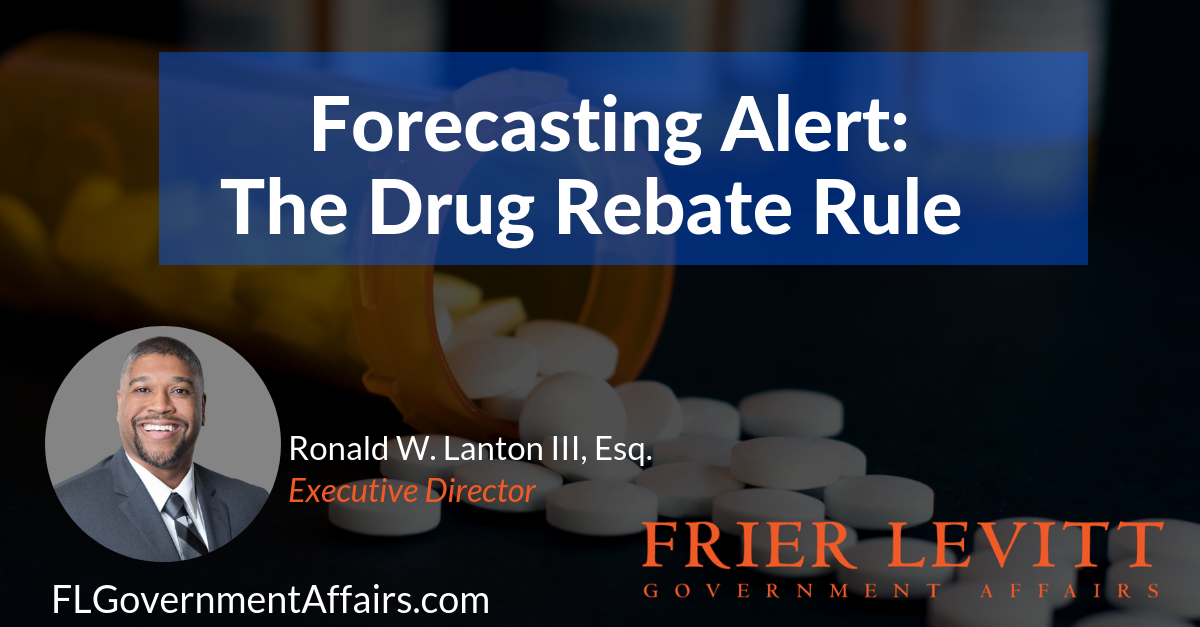 Frier Levitt Government Affairs (FLGA) has been made aware of a recent CBO report regarding a proposed rule on Rebate Safe Harbor. Here is what stakeholder need to know:

What is the proposed rule and what does it do?

HHS Secretary Azar proposed a new rule that will eliminate a Safe Harbor to the federal Anti-Kickback Statute that provides legal protection for rebate arrangements allowing drug makers to pay PBMs to secure their drugs position on PBMs’ Medicare formularies. The goal of eliminating this Safe Harbor, and replacing with a new one, is to ultimately lower prescription drug prices for patients and Medicare and to upend the complicated structure for how drugs are priced. If passed, the proposed rule has the potential to dramatically impact pharmacies’ acquisition price and pharmacy reimbursement rates. It could also potentially alter distributor profit margins, as well as impact the commercial space.

What did the CBO Report Reveal About the Proposed Rule?

Earlier this month, the Congressional Budget Office (CBO) released its score of the proposal and found that the proposed rule would increase Part D premiums and federal spending by $177 billion between 2020 and 2029. Interestingly, CBO stated that it “expects that rather than lowering list prices, manufacturers would offer the renegotiated discounts in the form of chargebacks.”

Who is the CBO?

The CBO is a crucial and highly influential voice in determining how policy is developed by looking solely at the cost Congressional bill or a regulatory agency’s proposal. According to the CBO, the CBO since 1975 has been produced independent analyses of budgetary and economic issues to support the Congressional budget process. Each year the agency’s economists and budget analysis produce dozens of reports and hundreds of costs estimates for proposed legislation. The CBO is strictly nonpartisan. It conducts objective, impartial analysis and hires employees without inquiring about political affiliation. They do not make policy recommendations, and each report summarizes the method underlying the analysis.

At this point the direction of the rebate rule is unknown. The comment period closed on April 8th and we are currently waiting for information from HHS. There are rumors on the Hill that due to the costs of this rule, there may be hesitation to continue forward with it. There has also been talk of a potential policy around out of pocket spending caps in Medicare Part D, as well as the discussion of drug importation in the wake of Florida’s latest legislative enactment.

With so much uncertainty in Congress and in the state legislature, it can be tempting to feel overwhelmed and not plan anything at all. While the status quo may feel comfortable, it will eventually change and you need to be ready. FLGA has its finger on the pulse of the various moving federal and state policy parts. Contact FLGA today to discuss the next steps for you or your organization.