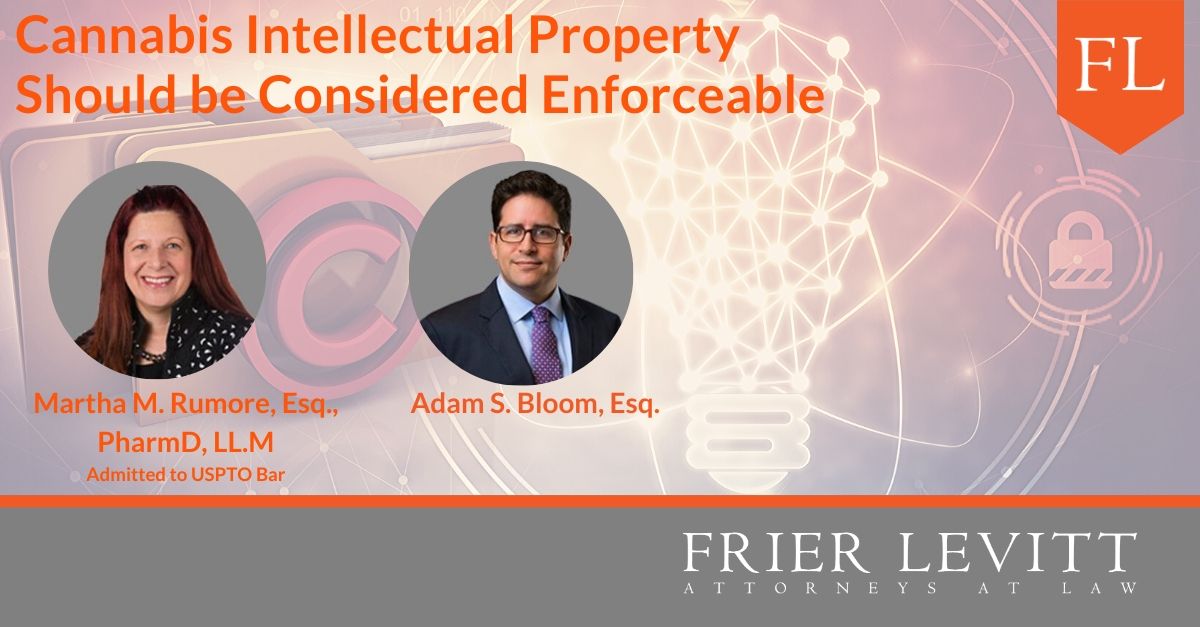 Market exclusivity rights afforded by intellectual property such as patents, copyrights and trademarks can provide a crucial advantage to cannabis businesses. In addition to providing a valuable market advantage, intellectual property is extremely advantageous to cannabis companies seeking funding from sources such as venture capital that often look for companies with patent applications on file. Although cannabis-related patenting is still in its infancy, over 2,000 active cannabis-centric patents/applications have already been issued or published, and as evidenced by the last few months in 2019, the number is skyrocketing. Most of these patents are for technologies such as cultivation, processing and extraction techniques, cannabis-derived products, and medical treatments.

The U. S. Patent & Trademark Office’s (USPTO) willingness to grant cannabis patents, copyrights and trademarks may or may not translate to a willingness on the part of the USPTO Patent Trial and Appeal Board (PTAB) and Federal Courts to enforce them. Since cannabis remains a Schedule I drug under the Controlled Substances Act (CSA), some have opined that the so-called “illegality doctrine” may preclude cannabis-related patent infringement cases as well as other cannabis-related commercial disputes. Pursuant to the illegality doctrine, judges could potentially decline to entertain a lawsuit, hold that the USPTO exceeded its authority, or decide that there is no entitlement to damages with regard to intellectual property related to illegal activity.
Although possible, we believe the “illegality doctrine” should not be applied to cannabis-related patents for several reasons. Most notably, cannabis-related patent enforcement cannot be hindered by the government or federal courts when the federal government itself created the patent. That is, these patents cannot be considered the result of illegal activity when the patent rights are conveyed by the federal government under patent statutes. Nor do patents convey any right to engage in activity illegal under the CSA. Additionally, it is worth noting that patents related to cannabidiol (CBD) which contains less than 0.3% THC on a dry weight basis would clearly relate to a legal product pursuant to the Agricultural Improvement Act of 2018 (P.L. 115-334) “Farm Bill” which legalized such products on the federal level.

Thus far, both the PTAB and the Federal Courts have NOT treated cannabis patents differently than other patents. On January 3, 2019, the USPTO PTAB issued a Final Written Decision in the case Insys Development v GW Pharma Ltd (IPR 2017-00503) upholding 11 claims relating to U.S. Patent No. 9,066,920 which addresses the use of phyto-cannabinoids in the treatment of epilepsy. Notably, the PTAB did not raise the issue of the legality of a cannabis patent and treated the cannabis patent as it would any other patent, focusing on typical issues that relate to all patent challenges such as patentability, scope, claim construction, infringement, ownership and enforceability.

Despite the Growth of the Cannabis Industry, Uncertainty and Limited Legal Guidance Exist

The USPTO’s experience with cannabis patents is evolving as is the universe of prior art used to challenge the validity of patent claims based on novelty or obviousness. Regardless of the IP strategy chosen, IP protection should be a primary consideration for cannabis companies.

How Frier Levitt Can Help
Frier Levitt offers a full range of Intellectual Property services including patent, trademark and copyright procurement, trade secret and confidentiality agreements, infringement and Freedom-to-Operate Opinions and due diligence. Our pharmacist attorneys provide a nuance understanding of the science, chemistry as well as related Life Sciences and FDA issues. Please contact our Intellectual Property attorneys if you require advice or have questions. 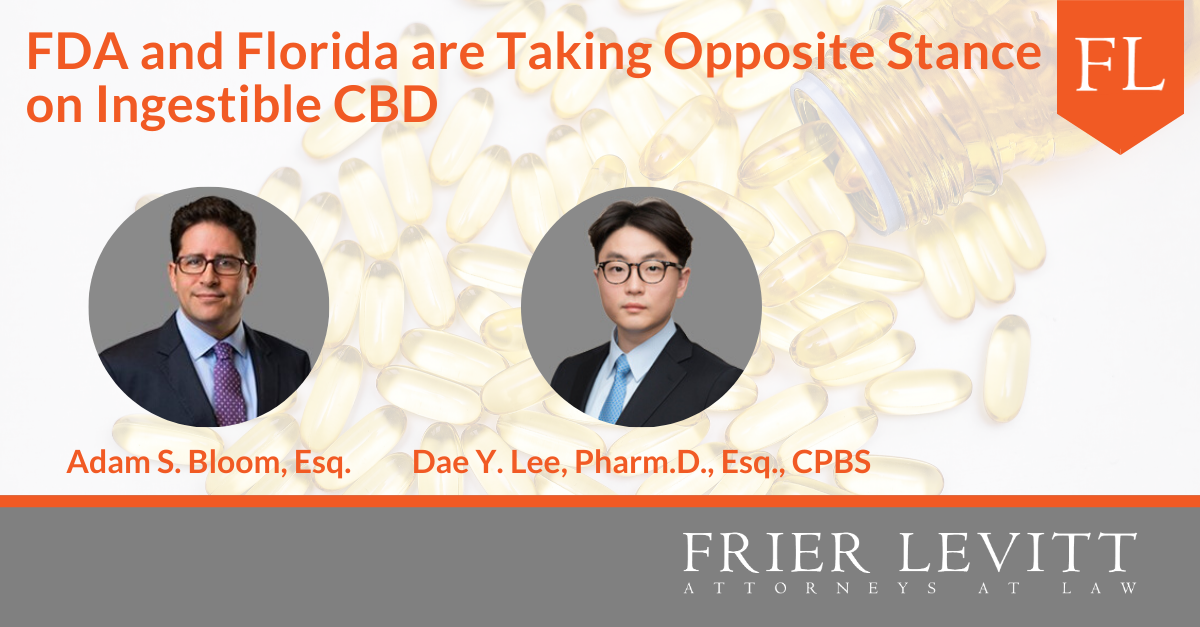 As part of an ambitious new state hemp program, the Florida Department of Agriculture and Consumer Services (the “Department”) announced that new food safety and animal feed rules went into effect as of January 1, 2020. Agriculture Commissioner Nikki Fried stated that the new regulations are crucial in “getting the state hemp program up and running to provide a new alternative crop for farmers, allow Floridians to access safe, quality CBD products, and help [the] state reach its potential as the nation’s gold standard for hemp.” These new regulations are intended to support the continued sale of hemp and its derivatives products, including CBD, while ensuring that consumers are protected.

Under the new regulations, any hemp extract or product containing hemp extract intended for human ingestion and for animal ingestion will be regulated by the Department. Any business that manufactures, processes, packages, holds, prepares or sells food made from or containing hemp extract is required to obtain a Hemp Food Establishment Permit to operate in Florida. Food consisting of hemp or hemp extract (including CBD) must be obtained from an “Approved Source” that meets certain local, state or federal food safety standards. Such foods are also subject to specific labeling requirements. Food containing hemp extract must have a THC concentration of less than 0.3% on a dry weight basis and the food must contain less than set limits of certain contaminants used in the hemp cultivation process. As part of the on-going efforts to minimize risk of foodborne illnesses, the Department will conduct routine inspections on such businesses.

Significantly, the new regulations allowing sale of ingestible hemp and hemp-derivative products runs counter to the United States Food and Drug Administration’s (FDA) current stance on these products. Despite the 2018 Farm Bill legalizing hemp with a THC concentration of less than 0.3% on a dry weight basis, CBD products are still subject to FDA’s laws and regulations, including those that apply to foods, beverages and dietary supplements. In this vein, FDA stated that “[i]t is currently illegal to market CBD by adding it to a food or labeling it as a dietary supplement.”

In the wake of FDA’s regulations on CBD products, a spate of class action lawsuits have been filed by consumers against CBD manufacturers mimicking FDA’s concern over illegal sale of CBD products including ingestibles for human and animal consumption. Meanwhile, U.S. District Judge Ursula for the Southern District Court of Florida in a class action lawsuit ruled on January 3, 2020 that a CBD manufacturer should not face certain liability claims until FDA finishes work reviewing CBD policy. In her opinion, Judge Ursula stated that the FDA’s current rules “provide little guidance with respect to whether CBD ingestibles, in all their variations are food supplements, nutrients or additives and what labeling standards are applicable.”

How Frier Levitt Can Help
Certainly, Florida’s newly enacted regulations have opened a door while further complicating the legality of ingestible hemp and hemp-derived products, which in turn impact industry Stakeholders including the extractors, manufacturers, wholesalers, and retailers. While many states will choose to wait until FDA issues its much-anticipated regulatory framework for hemp-derivative and CBD products, we envision that more states may take the necessary steps to enact regulations similar to Florida’s. Given the clash between federal and state laws, it is crucial for Stakeholders in the hemp industry to understand the current laws and regulations. If you need assistance navigating the regulatory environment for hemp, CBD or other cannabis-derived products, contact Frier Levitt today to speak with an attorney. 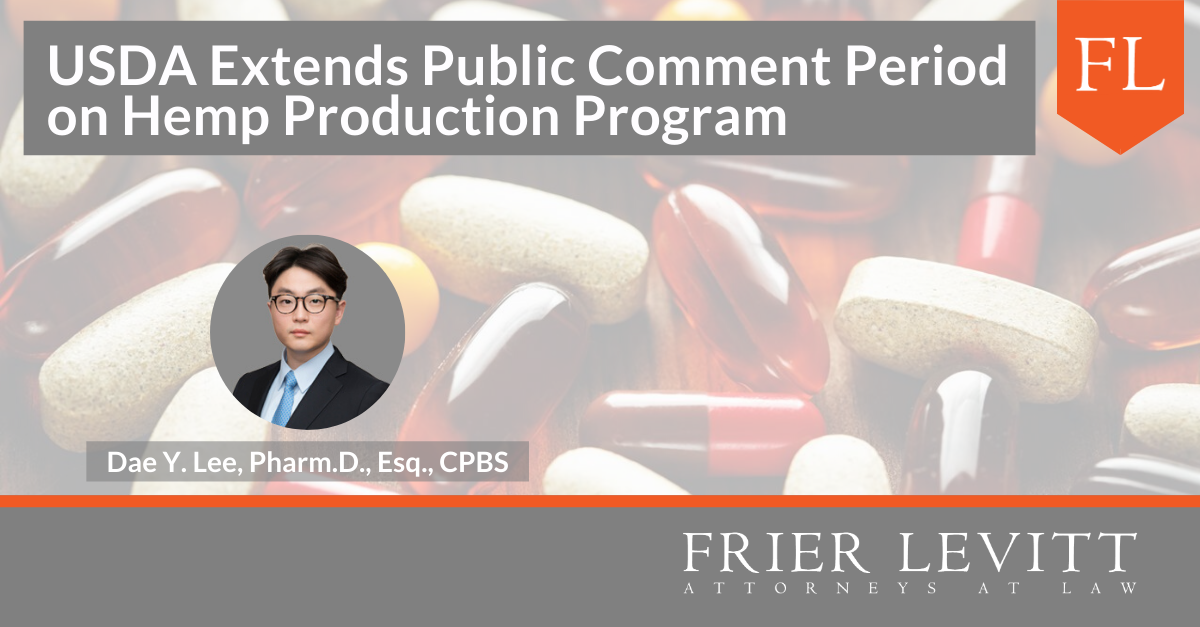 The U.S. Department of Agriculture (“USDA”) has announced a notice of comment period extension on the Hemp Production Program Interim Final Rule allowing hemp stakeholders to submit comments until January 29, 2020. By way of brief background, the Agriculture Improvement Act of 2018 (“2018 Farm Bill”) required USDA to establish the Program, which attempts to clarify the regulatory frame for States and Indian Tribes for the domestic production of hemp.

The Rule outlines provisions for the States and Indian Tribes to submit hemp plans for USDA approval. It also establishes THC testing protocols, interstate transportation, licensing protocols, and eligibility rules for federal programs (e.g., loan and crop insurance programs). More specifically, by and through the Rule, USDA is imposing strict sampling and testing requirements to ensure that the hemp does not contain THC exceeding 0.3%. However, farmers would not be considered in violation of the Rule unless the hemp crops contain THC exceeding 0.5%. Notwithstanding this, farmers are required to dispose any hemp crops with 0.3% – 0.5% THC. Furthermore, the Rule allows hemp to be transported across state lines even in the instances where the state does not authorize hemp production. Of note, states may enact stricter regulations impacting the production, transportation, and sale of the hemp and its derivatives.

As indicated above, the Rule provides much needed guidance to producers and farmers. However, it does not have any bearing on the FDA’s regulation on the hemp and its derivatives in food, beverage or dietary supplements. In other words, stakeholders in the hemp industry must comply with not only FDA and USDA regulations but also state laws that are often not in line with the federal regulations.  Moreover, the Rule does not address several key issues including, but not limited to, seed certification, total THC testing instead of the delta-9 tetrahydrocannabinol testing, and the potential issues arising from testing out of only Drug Enforcement Administration registered labs.

With the exponential growth in the hemp industry and the growing regulatory concerns, Stakeholders should review the Rule in detail and submit comments to USDA. Frier Levitt assists state and national associations around the country in drafting proposed legislation. Our “request for comment” work has played a prominent role on important national issues. If you want to learn more about the Interim Final Rule or would like to submit comments before January 29, 2020, contact Frier Levitt today.  Time is of the essence.